Sneezing is the removal of irritants and burst of air through the nose and mouth. Environmental triggers such as dust, dry air and pollution can lead to sneezing. Spicy foods sometimes can also lead to this problem. Homeopathy has the best treatment for Sneezing and Doctor Bhargava formulations are a result of techniques perfected over 100 years of practice. Sneezing can also lead to other symptoms such as cough, fever, runny nose and watery eyes. If you are looking for the best Homeopathic Medicine for Sneezing then Doctor Bhargava natural remedy provide you the best solution. 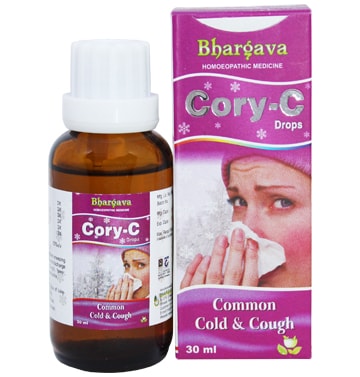 Sneezing, also known as sternutation, is the rapid, uncontrolled release of air from the lips and nostrils. There are many different causes of sneezing, but they are all characterized by an irritation of the mucous membranes of the nose or throat. Rarely is it a sign of a serious illness? Nonallergic rhinitis is characterized by persistent sneezing, runny or stuffy nose without a known cause. The signs of nonallergic rhinitis resemble the people having hay fever (allergic rhinitis), but they lack the typical signs similar to the allergic reaction.

Mucus coming out of the nose is what is meant by a runny nose. Colds, the flu, or allergies might be to blame, as well as cooler outside temps.

Cory-C Drop  is a best homeopathic medicine for running nose and sneezing produced by Dr. Bhargava. More about this homeopathy medicine for sneezing and runny nose later in this article. But before understanding the treatment, let us find out what the causes are so that the problem can be nipped in the roots itself.

Causes of Sneezing and Runny Nose

Something which stimulates or exacerbates the nasal tissues might result in a runny nose. A runny nose may be brought on by a number of things, including allergies, irritants, and infections like influenza and common cold. Nonallergic rhinitis, also known as vasomotor rhinitis, is the name given to a disorder where certain individuals consistently have a runny nose for no obvious cause.

Less often, polyps, irritating substance, a tumour, or symptoms that are migraine symptoms may induce a runny nose.

Now that the causes are imperative, we also need to understand what a bad runny nose looks like so that we can understand at what stage shall we proceed to take a medical treatment. So, what are the symptoms of sneezing and a runny nose? Let’s find out.

Symptoms of Sneezing and Runny Nose

Nonallergic rhinitis often doesn't result in the itchy nose, eyes, or throat that come with allergies like hay fever.

Before going to a medical practitioner for a runny nose homeopathic medicine, is there something that we can do at our homes? We have highlighted some domestic behaviour to control them. Let us find this out next.

What Are Some of The Precautions for A Runny Nose?

Maintaining excellent hygiene is crucial and often prevents the transmission of germs. A runny nose is a sign of various infectious diseases. Here are some easy recommendations to prevent the spread of such germs:

If these do not work and you still are suffering from continuous sneezing and runny nose, it’s time to get diagnosed and treated. Below mentioned is the Homeopathic Medicine for Running Nose.

Cory-C Drop– Cory-C Drop, a homeopathic remedy for runny nose produced by Dr. Bhargava can help you with treating sneezing and common cold. Techniques honed over a century of experience led to Doctor Bhargava Cory-C Drop. Take homeopathic medication right away to get the finest care. Cory-C drops also provide solutions for common cold, cough, and sneezing as well as influenza, coryza, and other illnesses that cause fever, headaches, and generalized body aches.