An ovarian cyst is a collection of fluid surrounded by a very thin wall within an ovary. ovarian cyst can be in different sizes from small to large. At the beginning of the cyst women may experience severe pain in the abdomen with menstrual irregularities with heavy bleeding.It can be treated with Doctor Bhargava's ovinorm drop that is effective & does not have any known side effects. Ovinorm Drop is also useful in infertility homeopathy treatment. 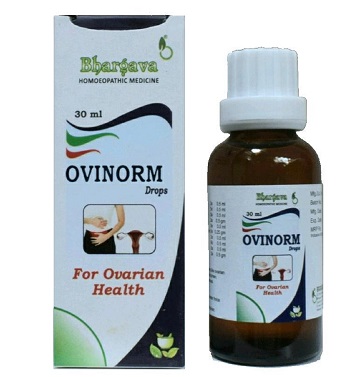 Ovarian cysts are common in women. Most ovarian cysts are safe and cause little to no pain. Within a few months, the majority vanish without therapy. Ovarian cysts, particularly those that have burst, may result in significant symptoms. Get frequent pelvic examinations and be aware of the signs that might indicate a potentially substantial issue to safeguard your health. Cysts in the ovary or surface are pockets or sacs filled with fluid. On each side of the uterus, women have two ovaries, each roughly the size, and shape of an almond. During the reproductive years, ova, which grow and mature in the ovaries, are released monthly.

Ovarian cysts: what causes them?

Every menstrual cycle, your ovaries typically form little cyst-like structures called follicles; when you ovulate, an egg is released from one of these follicles. A normal follicle develops into a "functional cyst" if it continues to expand. Usually, this kind of cyst goes away after two or three cycles.

Hormonal changes (including those brought on by fertility medications), pregnancy, endometriosis, and a severe pelvic infection that spreads to your ovaries are among the factors that raise your chance of developing ovarian cysts.

How to Get Rid of Ovarian Cyst Symptoms and Cure Cysts on Ovaries Naturally?

Treatment: Medicine for This Health Problem