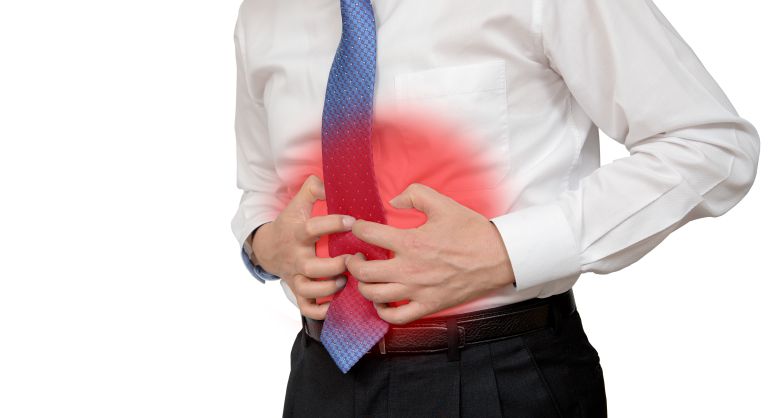 Gastritis is a group of disease that causes an inflammation, irritation, or erosion of the lining of the stomach. Acute gastritis occurs suddenly, while chronic gastritis develops slowly.

Gastritis can be caused by irritation due to excessive alcohol use, chronic vomiting, stress, or the use of certain medications such as aspirin or other anti-inflammatory drugs. It may also be caused by any of the following:


• Helicobacter pylori (H. pylori): The inflammation of the stomach lining is most frequently caused by a bacterium called H. pylori. The infection can lead to ulcers, and in some people, stomach cancer.

• Bile reflux: A backflow of bile into the stomach from the bile tract (that connects to the liver and gallbladder)
•Infections caused by bacteria and viruses

The most common symptoms include:
•    Belching
•    Nausea or Vomiting
•    Abdominal bloating & flatulence
•    Pain in stomach region which may extend to abdomen
•    Indigestion
•    Burning or gnawing feeling in the stomach between meals or at night
•    Hiccups
•    Loss of appetite
•    Vomiting blood or coffee ground-like material
•    Black, tarry stools

If gastritis is left untreated, it can lead to a Gastric ulcer and may increase the risk of developing stomach cancer

The role of Homoeopathy in indigestion:-

Homeopathy has a cure for both stomach and digestive problems. The natural Homeopathic medicines for Gastritis & Indigestion are not only of great help in getting rid of Stomach pain & hyperacidity but also eliminate the root cause of the Gastritis and other digestive disorders. It works by treating the underlying cause and not just the symptoms. The treatment is gentle and the relief obtained is usually long term.
There are many homoeopathic medicines that have the potential to cure Gastritis. Out of them, few are – Arsenic album, Phosphorus, Nux vomica, Carbo veg, Pulsatilla, Lycopodium, Robinia & Gas off tablet etc.

I found that is very good for me.

It is very helpful for my digestion problem.

It is very effective medicine.

This information is really helpful for me.